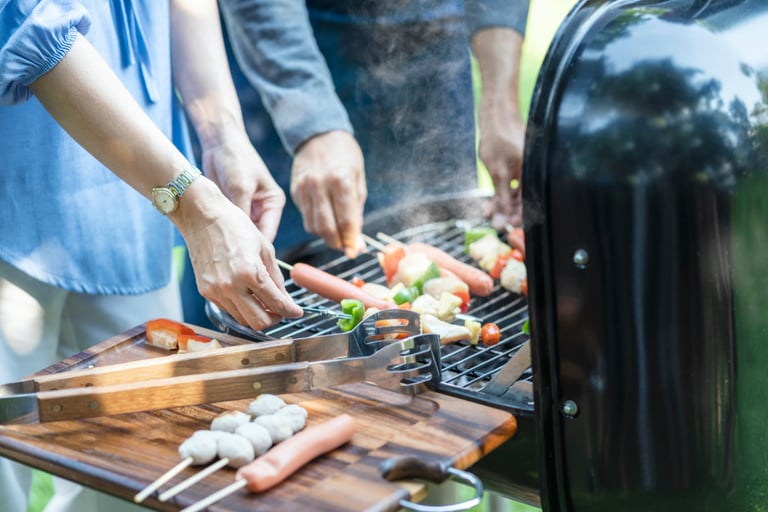 Grilling is a great way to cook during the warmer weather. (Although many hardy cooks continue year round —  particularly if they have a gas grill.) Grilling often has a social component, too — the gathering of family and friends to share in a communal feast. Whether you’re gassed about gas, or you put your bets on briquettes, there’s no denying that grilling is fulfilling. But have you reached grill “grateness?” Or would you like to improve? Here are some tips:

The debate over whether charcoal is better than gas can get pretty heated. And then there are electric grills to consider. A few factors play into the choice.

Most grilling greats would agree there’s no question that charcoal grilling provides better flavor. But it takes more time to get ready and a little more skill as far as controlling the temperature and evenness of the heat. Gas grilling has the convenience factor.

The further you move away from wood as your heat source, the less of that smoky, off-the-fire flavor you’re going to get. Charcoal grills not only smoke meats better than gas, they also release a chemical called guaiacol. Guaiacol is an aroma compound that gives meat a smoky, bacon-like flavor, and it only comes from wood and charcoal.

If you’re mainly after a quick-fix dinner with a minimum of effort, a gas or electric grill is the ticket. But if you prefer a more relaxed ritual of cooking, along with the most authentic off-the-fire flavor, then charcoal’s the charm.

Pros say the best cuts for grilling are usually going to be the ones from muscles that don’t get much work while the animal is walking around. In pigs and cows, that’s mostly the cuts along the back we’re all familiar such as loins, tenderloins, strips and rib eyes.

As long as it’s a nice, tender cut, any meat is great for grilling. Grilled lamb is especially good, the smokiness of the grill really compliments the flavor. And don’t skip the sea — grilled seafood can also be great; grilled shrimp is a great place to start.

If you’re using high-quality meats, you’re usually best off using salt and pepper and letting the flavor of the meat stand alone. Most pros advise against trimming off fat. Quite simply, fat = flavor. For grilling especially, the smoke that comes from the rendered fat hitting your coals is where the best grilled flavor will come from. It’s also wise to allow the cut to “relax” out of the fridge before putting it over any heat. This reduces the likelihood of the heat shocking the steak therefore making it tough.

Some grillers maintain marinating is the secret to success. And though it can add lots of flavor to lean cuts that lack flavor from fat or marbling, marinating does not make meat more tender. Acidic ingredients, such as lemon juice, vinegar or wine do affect meat. But they make it firmer, not more tender. Essentially, marinades just coat the surface of the meat but don’t really penetrate very far into it.

However,  marinating for long periods of time can affect the texture of the meat in an unpleasant way. A quick marinade for an hour or two can give your meat some added flavors if you’re looking for it. The only surefire way to make lean cuts more tender is to physically break up the muscle fibers either by pounding or with a device that pokes the meat with a bunch of little knives called a jaccard.

If you’re looking for a specific flavor profile across your meal, there’s nothing wrong with rubbing the meat with some spices. Maybe sea salt, brown sugar, cayenne pepper, paprika, or garlic powder.

It’s best to use a two-handed approach: One hand to scoop and sprinkle the rub and the other to massage it into the meat on all sides. A common rule of thumb is 1 tablespoon of rub for every pound of meat. Just remember that the more you apply, the more strongly you’ll taste it. And although you’d think that wrapping dry rubbed meat in plastic wrap will enhance the flavor, removing the wrap can actually remove a lot of the rub!

Note: There are “wet rubs,”  which might use the same seasonings as dry ones, but they’re suspended in cooking oil or some other liquid. Sometimes it’s a matter of the flavor you want to impart. If you like soy sauce, for instance, there’s no way to really duplicate that with dry ingredients only.

To add extra smoke to your grilling, add wood chunks. Good smoke is produced by hardwoods, which are low in resin and high in flavor. First, soak your hardwood chunks in water. Chunks should be saturated but not dripping when added, so let them drain.

For a traditional beef barbecue, you’ll usually use a stronger flavored wood like hickory or mesquite whereas for more delicately flavored things like pork you might use more fruitwoods like apple or cherry or a combination.

For A Charcoal Grill

You can add the wood directly to the coals once your fire’s died down. Don’t waste the wood by adding it until you’re ready to cook.

For A Gas Grill

It’s easiest to take your soaked wood and place it in a foil packet. Poke a few holes to let the smoke through. Cleanup bonus: All you have to do is throw out the packet after it's cooled down.

The Grill Drill: The Firm 5

There are some rules you should always follow no matter what kind of grill you’re using or what you’re cooking:

That’s it. Happy grilling, all!

Benefits of Grandparents and Grandchildren Living Close Together

There comes a time in life when the allure of living in a new location beckons us. Whether you’ve...
Read More

If you're like a lot of grandparents, you may not live close to your grandkids. Any chance  you...
Read More

During the long hot days of late summer, give yourself and your friends something to look forward...
Read More